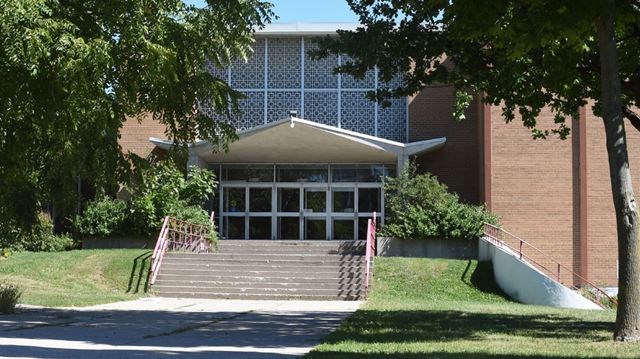 Posted at 08:28h in main, new, Uncategorized by Richard Martz

The Northdale neighbourhood needs a new heart and it seems one may be taking shape.

The City of Waterloo, Wilfrid Laurier University and the Waterloo Region District School Board are considering partnering on a project that could include a new four-storey building for Waterloo Collegiate Institute, green space, a performing arts space, health and wellness space, a parking garage, plus retail and service uses.

A feasibility study was presented to council and the school board this week.

Initial redevelopment costs for the concept exceed $78 million. The site is bounded by Columbia, King, Hickory and Albert streets and split down the middle by Hazel Street.

“We’ve known the opportunity in this area is significant, that the need for us to get this right is absolutely critical to achieving the future vision not just for the Northdale plan but of all the parties,” said Ward Coun. Jeff Henry.

“We have great opportunities here,” school board trustee Kathi Smith said. “It excites me because we think it might open the door to looking at some other partnerships (for other schools).”

Education trustees want proof, however, that Waterloo Collegiate, facing declining enrolment, would still draw students to an area where families are disappearing.

“You have to ask, even with redevelopment, how many kids are going to be able to be available for high school from that area,” trustee John Hendry said.

Lands owned by the school board and university make up 17 per cent of the Northdale neighbourhood and the city has high expectations for what happens there.

Growing the game at the grassroots level

The site is about 22 acres (8.9 hectares). The school board owns 17 acres (6.8 hectares) while the university owns five acres (two hectares.)

Waterloo’s role will likely be limited to partnering on outdoor play fields, about 3,500 square feet of community space and a small space for an outreach office.

The city also shared the cost of the study and contributed staff time.

Coun. Mark Whaley said with millions in RIM Park debt not to be paid off until 2031, he has no interest in the city forking over a lot of cash for this project.

“From my own perspective as a councillor, I think the message we should send as partners in this case is call us in 2031,” he said.

Heritage supporters are pressing to have the original 1959 Waterloo Collegiate building saved in any redevelopment. It was Waterloo’s first public high school and its industrial lines are seen as a fine example of mid-century modern architecture.

“It’s one of the only examples we have left in the region where a mid-century modern high school has been untouched,” said Nick Lawler, chair of Waterloo’s municipal heritage committee.

It’s not easy to persuade everyone that a high school at 57 years old has enough heritage appeal to save, Lawler said. The decaying building needs $15 million in repairs plus another $8 million to make it fully accessible for the disabled.

A feasibility study by consultants Live Work Learn Play says portions of the existing high school could be reused in a new build.

“The feasibility study gives us a valuable tool to continue our community dialogue on the best ways we can place education at the heart of this vibrant neighbourhood’s redevelopment,” school board chair Kathleen Woodcock said in an email.

Preliminary estimates suggests building up to 238,000 square feet of new space, likely split into different buildings. That makes it easier to pay for the work rather than splitting buildings between funders, said Joseph Milos, project manager with Live Work Learn Play.

That still wouldn’t max out the site.

According to the feasibility study discussed Monday, agencies weighed in on what’s missing, desired and possible in Northdale to help get to a preliminary vision.

Programming at the hub is expected to include arts and culture offerings such as a performance space, and a health and wellness hub that would incorporate a fitness centre, athletics education, and nutrition and health retail.

The study identifies other levels of government, community partners and the private sector as potential funding partners. Waterloo and the public school board have not budgeted for involvement, beyond studies.

Construction could be more than 18 months out, the feasibility study said.

Issues still to be resolved include how to divide ownership, traffic, drainage, heritage concerns, pedestrians on Hazel Street, governance options, and how to redevelop without disrupting classes at WCI.