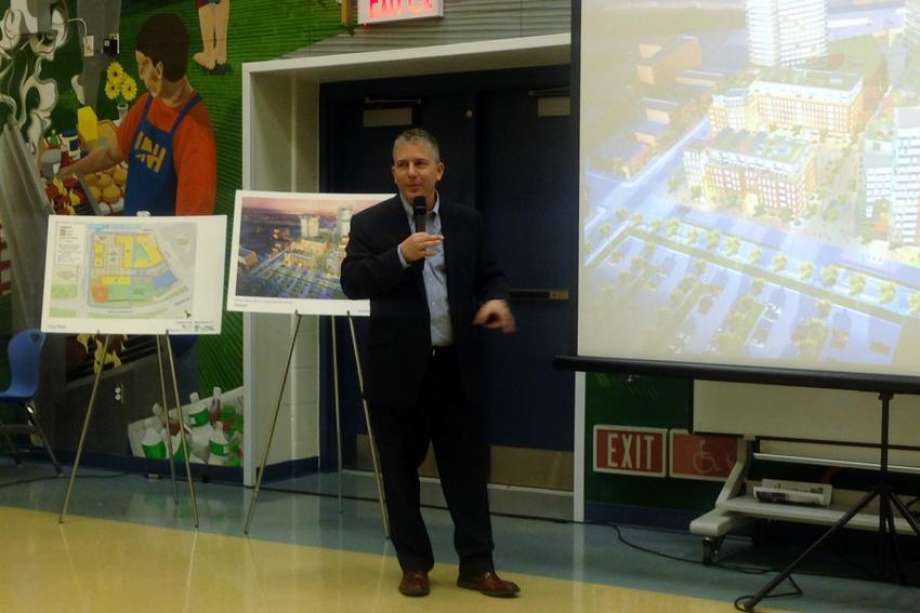 NEW HAVEN — Canadian developer Live Work Learn Play lived up to its name with a presentation about its ambitious plans for the old Coliseum site that — if actually built over the next several years — could make people forget the place where Elvis sang, families watched the circus and hockey players roamed.

Backed by a lush mural of community gardens and picnicking on the cafeteria wall at Hill Central Music Academy, top company officials including Max Reim, his father, Bill Reim, and Kiran Marok spoke of a dynamic, mixed-use project starting with 524 apartments and 52,000 square feet of public space. They spoke of rooftop gardens and a pool that would be open to the public, hundreds of new jobs, businesses that encourage a healthy and active lifestyle, slow food to help make this « a great world food mecca, » a place for gathering and social connections, stitching the city’s neighborhoods back together, creating a « dynamic urban village » and making it uniquely New Haven-flavored.

Max Reim said the company even searches and does « casting » to find the best of the best food and retailers.

LWLP has done it in other cities and college towns, and Max Reim said the huge project evolved out of the company’s association with Newman Architects on York Street. The group noticed exciting projects at Yale, Gateway Community College, the Ninth Square and 100 College St..

« We will only devote ourselves to a handful of cities in North America, » he said before a slide presentation to about 60 people. « And we’ve decided to invest in New Haven for many, many decades to come, hopefully. You have all the right ingredients, all the world-class ingredients, and now it’s time to stitch them together … to seamlessly integrate all the great institutions you have — education, the health care, the different diversity and communities. »

The $300 million plan by the city’s preferred developer, which also includes an office tower offering the promise of 727 to 1,172 jobs and a four-star hotel with 675 jobs on the 4.5-acre site, contrasts with a previous developer’s idea and the Coliseum itself — « a giant in-fill project, turning it’s back to everyone, » said Max Reim.

The project as envisioned in several architectural drawings on display « doesn’t have any back. This allows us to have a front door everywhere. »

Artist Robert Greenberg, son of ACME Office Furniture Co. owner Alan Greenberg and a collector of New Haven memorabilia that would fit well in the 35 small shops on the pedestrian-only central plaza, said, « I’m usually very critical of designs, coming from New York, but I think this is a fabulous design. »

Reim said the Thursday event — with a sound system, audio-visual technician and copious sandwiches — was being held to gather people’s ideas and input as the process continues.

« The thing about his site, » said Greenberg, « is it’s very historical. This is where the sea front was, » pointing to a corner of the property.

Reim agreed during his presentation, saying, « Back then, as long as it was near the waterfront, it usually became the great marketplace. This is where mixed use (began) in New Haven. »

Anstress Farwell of the Urban Design League said she didn’t have an opinion about the plan formulated yet, but LWLP has a good reputation for work on the Storrs Center near the University of Connecticut (also the Great Pond development in Windsor), where « they had a lot of meetings with the community to first educate them about how to put together a retail center, and then had this very intense charrette (planning and collaboration process) over a period of time. »

There was no mention Thursday of an anchor tenant for the offices, and the project is dependent not only on city approvals but on state Department of Transportation cooperation in the form of revisions to the Route 34 connector work — bringing it to grade more quickly as it transitions into the city street once known as North Frontage Road and now known as MLK Boulevard. That will allow a true crossing of Orange Street over to the Union Avenue area. Max Reim called the road work an « essential » part of the plan.

Assuming the Route 34 work can be done effectively, Reim said the project can be done with just private equity. Asked whether LWLP would turn down the state’s First Five grant money, he said, « It’s not about turning it down; we want to do what’s right for the project. »

Reim said it’s been two years in the planning stage, involving « well into seven figures and 100 percent funded by myself and my family. »

He said the project must « exude a great personality of place. This is called place-making. It’s the opposite of gentrification. We must create a place that becomes know throughout the entire state of Connecticut as part of New Haven. »