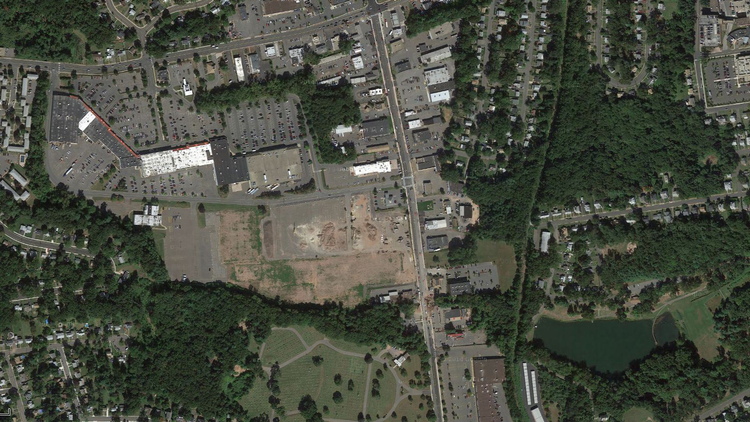 The company working with the town to revive the « dark side » of the Manchester Parkade will take a more prominent role in the project under a recently signed agreement.

A memorandum of understanding between the town and LiveWorkLearnPlay (LWLP) gives the company two years to launch development on the 18-acre, town-owned site off Broad Street. The deal was announced at a news conference Thursday morning before a redevelopment agency meeting.

The key to the town’s plan of a mixed-use development is landing an anchor, an educational or medical facility. Residential and retail uses also are part of the vision. As master developer, Montreal-based LWLP will use its own money to secure financing and develop the parcel, officials said. Eventually, the company would buy the property.

LWLP has received « very strong interest from health and wellness institutions that we have a relationship with, » company head Max Reim said in a phone interview Thursday. « They want to know a lot more about Manchester and Hartford County. They’re very much eager to be working with the town. »

The developer will work with several partners, he said, including Navigant, a consulting firm involved in similar projects; Fuss & O’Neill, a Manchester-based engineering company; and Newman Architects of New Haven. Two years is a realistic time frame, Reim said.

« We have to make progress in year one and get a shovel in the ground in the first 18 to 36 months, » he said.

In the interim, the company plans to host events, festivals, « pop-up » retail markets and other « cool things to do » at the site, starting in spring 2017, Reim said.

LWLP (www.lwlp.com) is master developer for the ongoing New Haven Coliseum mixed-use project and the developer of the completed Storrs Center, « a mixed-use college town center » in Mansfield. The company’s relationship with Manchester began in 2013, when LWLP was the sole respondent to the town’s request for developers interested in the Parkade site. Since then, the company has worked as a paid consultant, analyzing the market and reaching out to potential tenants.

Because LWLP now must put its own money on the line, redevelopment agency member Gary Sweet said he is confident of results. Board of directors Minority Leader Cheri Eckbreth said Reim has a big stake in the property and a timeline to incentivize action. At the same time, the town retains ownership to ensure that taxpayers get a return on their investment, Eckbreth said.

Voters in 2009 approved an $8 million bond to redevelop the area, once the site of a shopping plaza. Since then, the old retail buildings have been torn down, Broad Street has been rebuilt and the town purchased blighted automotive businesses on the other side of the street and demolished those buildings.

Also, as part of the Edgerton Street culvert replacement, the town cut an opening in the old railroad embankment that separated Center Springs Park from Broad Street and installed a pedestrian bridge over the gap. Town officials plan to buy an Asian restaurant on Broad Street in front of the bank cut and create a landscaped connection to the park.

Reim has said that the connectivity between the Broad Street site, the park and downtown is critical to the development plan. The town has great assets, particularly in historic buildings and open space, that the developer and its partners will use to remake the Parkade site, he said.

« I think right now, he is our best chance, » Eckbreth said of Reim and his company.