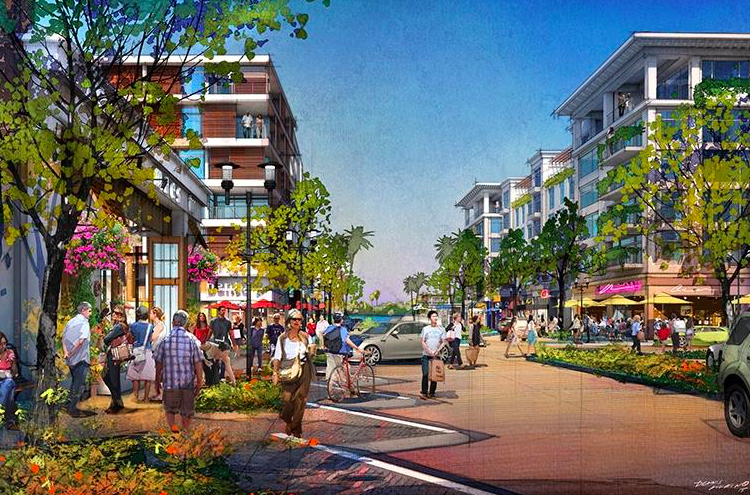 March 18, 2018 A sense of place: The human experience is vital for Downtown’s success

Posted at 13:51h in main, new, Uncategorized by Richard Martz

You can find your way to Downtown by looking for our striking skyline of tall, grand buildings, even from miles away over the St. Johns or from the interstate. But once you’re there, on the ground, about all you see are the bottoms of those tall, grand buildings and their parking lots. What people are there hustle from car to office and back to car, coming and going on those efficient one-way streets.

It’s not really a concrete jungle, more a concrete mausoleum for the rich urban life that existed there for a century until sprawling suburbs sucked away the people and soulless malls seduced the stores.

The current campaign to revitalize Downtown includes more grand buildings within a master plan and public-private partnerships and the politics of city subsidies and all that, but this time, the builders also need to think about the essential ingredient: people.

After all, the “vital” in revitalization refers to life, having good energy, liveliness or force of personality. So revitalizing Downtown means repeopling it.

Much of that will be residents, as apartments and condos are sprouting or being planned all around Downtown, toward the goal of a critical mass of 10,000 people.

But it also must include people who come Downtown because it’s fun, interesting or comfortable, just to hang out, maybe lingering after their workday before beginning the trudge back out to the suburbs or the beach.

There must be opportunity — and encouragement! — for people to take their kids to play in a riverfront park, watch the boats go by, marvel at the dramatic head-on merger of the Atlantic Ocean and the St. Johns River and hope to see manatees or even dolphins.

Everyone focused on revitalization must understand that what we are after is a Downtown that, rather than just being building-defined, is people-fueled.

Placemaking is a relatively new concept that is the artful blending of physical, social, cultural and artistic forces to create a place, small or large, that is or becomes naturally vital for people.

Without the benefit of new knowledge and thinking, Jacksonville over the years has inadvertently developed or allowed largely lifeless, and even negative, public spaces — but now it faces inspiring opportunities to create vital spaces in a new Downtown.

“Public places are a stage for our public lives,” says the Project for Public Spaces, a non-profit that helps cities create and sustain such spaces to build community.

“They are the parks where celebrations are held, where marathons end, where children learn the skills of a sport, where the seasons are marked and where cultures mix. They are the streets and sidewalks in front of homes and businesses where friends run into each other and where exchanges both social and economic take place.

“They are the ‘front porches’ of our public institutions — city halls, libraries and post offices — where we interact with each other and with government.

“When cities and neighborhoods have thriving public spaces, residents have a strong sense of community; conversely, when they are lacking, they may feel less connected to each other.”

Placemaking can be happenstance or a sort of human engineering that can be used for an entire community or for a piece of a city block. “It’s a spectrum,” said Tony Allegretti, executive director of the Cultural Council of Greater Jacksonville. “On one end, just throw a chair out, and on the other end, a multi-faceted experience cluster of retail, outdoor dining, etc. I’m more grassroots: It’s not about infrastructure at all, just something that gets the community together.”

Jake Gordon, CEO of Downtown Vision, offers a more structural definition: “To me, placemaking is a multi-faceted approach to the planning, design and management of public spaces. It capitalizes on a local community’s assets, inspiration and potential, with the intention of creating public spaces that promote people’s health, happiness and well-being.”

When 140 Jacksonville leaders went on a fact-finding trip to Toronto in November, they heard Rob Spanier, a partner in an international real estate firm called LiveWorkLearnPlay, talk about creating “iconic and thriving” mixed-use neighborhoods where “people love visiting and wish they could live that life,” college and resort towns, for example.

Spanier’s work, some of it for Tallahassee, focuses on placemaking for entire communities, built around strategizing to attract people and engage community. One approach is to actually compete with malls through innovations like “interactive retail,” pop-up shops and adventure experiences, “things to do, not just buy things.”

“It’s happening everywhere,” he said, and “Jacksonville is perfect.”

In its work with more than 1,000 public spaces, the Project for Public Spaces has identified four key qualities of successful spaces.