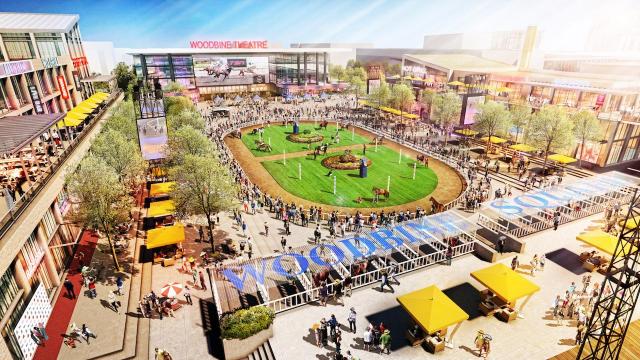 Posted at 08:01h in main, new, Uncategorized by Richard Martz

In April, the Woodbine Entertainment Group (WEG) announced an ambitious redevelopment plan for the 684-acre racetrack lands east of Toronto’s Pearson International Airport. Touting a “city within a city” concept, the announcement was accompanied by a rendering depicting the heart of a new community featuring a mix of entertainment, retail, office space, and residential uses. This month, re-zoning and subdivision submissions to the City of Toronto reveals more concrete details of the master-planned community, with a preliminary phasing plan indicating that the expansion of entertainment facilities will kick off the redevelopment, with future uses to follow. A rendering of the expanded Entertainment Facility, image courtesy of WEG

The May 15th submission is composed of three individual applications. WEG is now moving to advance a pair re-zoning proposals to allow for expanded gaming facilities, as well as a subdivision draft plan that “establishes a framework for public roads and services” for the 293-acre portion of the site north of the existing racetrack. Set to house a mix of gaming, retail, office space, arts & culture, and convention space. Building on existing approvals to expand the site’s gaming operations, the first re-zoning application calls for the addition of live gaming as a permitted use within the grandstand building the overlooks the racetrack. A second re-zoning application has been submitted to allow live new gaming facilities in the lands to the north and east of the grandstand, which remain occupied by a large surface parking lot. The current submissions, image via submission to the City of Toronto

Completed by additional commercial uses, the expansion of OLG gaming facilities will lead the redevelopment. According to WEG, the existing ‘Slots at Woodbine Racetrack’ site will also continue to operate as a casino, with the Ontario Lottery and Gaming Corporation (OLG) currently seeking a private sector provider (set to be named later this year) to develop an expanded entertainment hub. The master plan for the site, image via submission to the City of Toronto

While new gaming facilities planned east and north of the grandstand are part of Phase 1, the area immediately west of the grandstand would be developed as a mid-rise cluster of commercial buildings—housing offices, retail, and cultural facilities—in Phase 2. The remaining vacant land covered by the 293-acre subdivision draft plan would eventually be redeveloped with a greater mix of uses, apparently including a sizeable residential component (as it stands, the lands are zoned as an ‘Employment Area’). Taken together, the two phases would introduce over 2 million ft² of new uses to the site. The existing grandstand (brown), the gaming district (orange), and the Phase 2 commercial urban village (yellow), image via submission to the City of Toronto

For the time being, the subdivision draft plan lays out a general vision for the north side of the side. With the urban street grid extended through the 293-acre lot from the north, east, and west, the site will be re-integrated into the urban fabric, with preliminary sketches showing a relatively permeable cluster of urban blocks surrounding the grandstand. More immediately, the re-zoning applications submitted for the enhanced grandstand and the adjoining gaming district build on previous City approvals from 2007 and 2015, which paved the way for the opening of the ‘Slots at Woodbine Racetrack’ casino. Conceptual GFA plan for Phases 1 and 2, image via submission to the City of Toronto

Developed for WEG by LiveWorkPlayLearn (LWLP), the master-planning process involved numerous planning and design firms, including SWA Group, BCV Architects, and Nelson Nygaard, with additional consultation—and the recent submission documents to the City—spearheaded by IBI Group and Walker Nott Dragicevic.