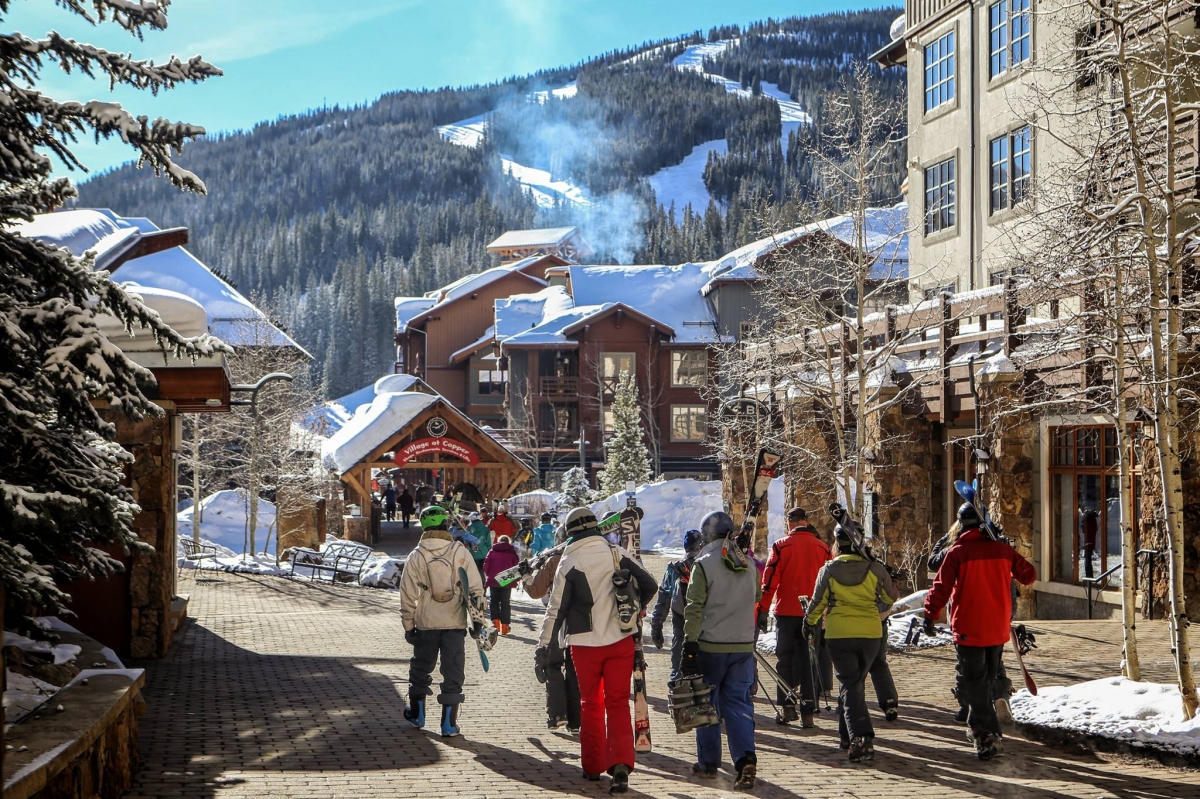 Posted at 12:49h in main, new, Uncategorized by Richard Martz

So much fanfare surrounded the opening of Copper Mountain’s new village last season that when skiers showed up they expected more than they got. The clutch of buildings at the base of the American Flyer lift offered a new day lodge, a handful of condominium complexes-and not much else. Searching for new restaurants and shops was an exercise in futility, since there was little more than vacant commercial spaces and closed-off construction zones.

Well, as the saying goes, Rome wasn’t built in a day. The village builders at Intrawest, the Vancouver-based company that owns the resort, have much more planned for Copper, including some recently announced proposals that are nothing short of mind-boggling.

This year, skiers will begin to see new stores, bars and casual dining spots, although many won’t be operating until late in the season or beyond. With the summer 2001 opening of Passage Point, the new lodging has been expanded from four to five buildings. This project, the dominant structure of the new village, has six stories and 135 units, consisting of studio to three-bedroom floor plans. By late fall, 65 percent of them had sold at prices ranging from $210,900 to $749,900.

Having a larger bed base adds critical mass to the village, but the Copper faithful have a fierce craving for restaurants and nightspots. Now they’ll have a little more to whet their appetites, including the trendy Indian Motorcycle Café & Lounge, strategically located on the Plaza facing the slopes. Also planned: a sprinkling of food joints and bars. But a gourmet, four- or five-star restaurant is nowhere in sight.

Still, the resort expects to have nearly 70 commercial tenants, including 10 food and beverage outlets, by next winter, according to Max Reim, vice president for commercial development. “We’re casting for every commercial space, and we have close to 95 percent of the leases completed,” he says. “We’ve been highly selective, looking for the best of the best.” Having learned its lesson at Whistler Village, which is chock-a-block with tacky T-shirt shops, Intrawest now tightly controls all retail in its villages.

Clearly, the company realized that retrofitting Copper’s base area presented a unique challenge, since it had to incorporate several aging, mundane buildings left over from the Seventies and Eighties. By contrast, Intrawest’s other villages, including Whistler, Keystone and Squaw Valley, began with a relatively clean slate. And the reason that Copper’s new village was unveiled as largely a shell without substance was because Intrawest chose to create the entire core at one time instead of prolonging construction over five to 10 years. “It was no small task to put this thing together in 24 months,” says Paul Stashick, corporate vice-president of real estate for Colorado. “Copper is the fastest and largest village we’ve ever assembled in the company’s history.”

Stashick also spearheaded the new Creekside Village at Whistler and crafted the master plan for Panorama in the interior of British Columbia. While he inherited an existing design scheme for Copper, he wasn’t satisfied with many of its components. Even after the buildings had been completed, he launched an overhaul of storefronts and public spaces, replacing windows, doorknobs, signs, light fixtures, benches and other trim work. He also created a new theme: “High Alpine, High Tech and High Energy.” Once again, Copper was put through a retrofit, and it doesn’t appear as if the tweaking will be over anytime soon.

Theming the village, in Stashick’s mind, was essential for Copper to differentiate itself from competitors. “You have a Bavarian theme with Vail, Victorian with Breckenridge, cowboy-Western with Steamboat, and mining with Keystone,” he says. “We couldn’t go backward and do an old historic village, so we looked at Copper as a combination of Y2K futurism and high-alpine base camp, with technology as the bridge between those elements.” The target market for this theme, he adds, is “a younger, more progressive person,” i.e. a 30-year-old male from Denver, considered the mainstay of the area’s drive-up business. The trick is in balancing this customer’s desires with those of the baby-boomers who make up the majority of property owners.

Even skiers who visited Copper last season will notice a difference in the village this winter. “The climbing motif is now very apparent,” says Stashick. “All of the street lights in the village have ice-axe handles that hold the fixtures to the posts. We’ve replaced every storefront door handle with customized handles made of carabiners and ice axes, and the signs and benches all reinforce the high-alpine look.” Further, a 42-foot-high climbing wall that incorporates a waterfall is now complete.

To weave in the technology, Copper has wired every structure with fiber-optic cable. And, says Village Executive Director C.J. Julin, the Burning Stones Plaza has been converted into “a true staging and entertainment complex” with an array of “Cyberlights.” Perched on 30-foot-high towers, these theatrical beams will shoot patterns onto the slopes in a kind of Las Vegas-style sound-and-light show.

If all of this is not enough to convince people that the gap between ski resort and theme park is closing, consider a recent announcement from Intrawest that kicks the whole concept up a notch. In October, the company made a deal with Peak Entertainment Group LLC, a New York powerhouse of big-name entertainment moguls, to build a 70,000-square-foot performing arts and recording complex on what is now the Chapel Parking Lot. Scheduled to open in 2003, this multimillion-dollar facility will have two halls for music, theater and film (800 and 300 seats, respectively), high-definition video/audio recording studios, and a high-tech conference center.

Hold onto your hats, because this center is just a warm-up for a new wing of the Village. Intrawest is now proposing to build a 240-room high-end hotel-“the Chateau Whistler of Copper Mountain”-next to the entertainment complex. “We’re looking for a leading hotel operator, and this will become the marquee facility of the Village,” Stashick says.

Intrawest also wants to build a gondola that begins at the front of the parking lot and provides a seven- to 10-minute ride to the village core, stopping at East Village, at the performing arts center and at a vastly expanded recreational complex.

Although all of this must be approved by Summit County and other government agencies, the revised master plan would require doubling or tripling the bed base at Copper Mountain, from roughly 1,500 to as many as 4,000 beds, thus accommodating 8,000 to 10,000 people. And while longtime local residents and second-home owners are generally supportive of the growth, some of them wonder if it’s too much, too soon. “The last thing we want is to look like another Whistler,” says Tom Malmgren, a broker who owns Carbonate Real Estate and has lived here since 1973. “That town has too much density with too many people.” Also, he questions Intrawest’s obsession with a younger, hipper crowd. “I realize that snowboarders were the salvation of the resort industry a few years ago, but the people who are buying property here are 40, 50 and 60 years old.”

If the Intrawest vision prevails, Copper Mountain believes that it will have one of the largest dedicated mountain resort villages in the United States and the first “smart” village that uses technology as its nerve center. “We’ve thrown everything at Copper, and we’ve spared no expense,” says Reim, a French Canadian from Quebec. “We felt we had to come into Colorado in a big way if we were going to create a distinctive destination resort environment. We’re making as much noise as we can.”