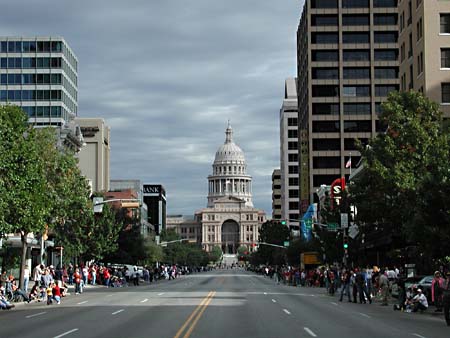 Posted at 09:54h in main, new, Uncategorized by Richard Martz

A pair of recent community charrettes brought Austinites together to brainstorm, plan, and meld minds on two diverse topics: Congress Avenueimprovements and a community plan for the Austin Climate Protection Program. In both conversations, some of the same solutions emerged, including planting more trees, getting rail transit Downtown, and creating attractive urban “people places.” At the end of the day, both groups also wrestled with the same challenge: how to sustain the excitement and momentum created at the event and translate it into real progress on the ground.

On Feb. 26, the Downtown Austin Alli­ance and partners hosted about 60 community members at a half-day charrette (technically, an intensive architectural/urban planning exercise) and luncheon symposium, Enhancing the Congress Avenue Experience: Leading Downtown Into the Future. The event grew out of work done by DAA’s Congress Avenue Wow committee over the past year and opened the committee’s dialogue to include a diverse group of property owners, Downtown business owners, residents, and other community members in defining an action plan. The challenge before the group: As the “Main Street of Texas,” what does Congress Avenue need to “measure up to the standards of the great public streets in the greatest cities of the world?” Small groups walked-and-talked each block of Congress Avenue, taking notes and photos to identify changes needed to achieve the block’s potential.

Participants then came together to discuss issues affecting Congress Avenue as a whole – specifically how urban design principles might apply to the avenue. (The crowd burst into applause at the comment, “Surface parking is not our highest and best use.”) In defining what Congress Avenue should be, common themes emerged: sidewalk cafes, thriving retail businesses and window shopping, streetcars instead of buses, great people-watching, and stronger connections to both Lady Bird Lake and the grounds of the state Capitol.

At the luncheon, keynote speaker Max Reim deputized everyone in the room, challenging them to leverage their relationships and resources to achieve desired improvements, saying, “You are the game-changers for Congress Avenue.”

Smith said later that he was very encouraged by the energy and consensus at the sold-out event (which had 40 people on a waiting list): “There was a great deal of interest and passion – more than I expected – about Congress Avenue. We’re not reaching our potential here!” The DAA will put out a preliminary report soon, distilling the ideas gathered. (The report and photos will be posted to www.downtownaustin.com; direct inquiries can be sent to molly@downtownaustin.com.)

Envisioning a rosier – or in this case, greener – future, was again on the agenda March 4-5, when the ACPP held its Community Climate Change Planning Charrette/Workshop. A community plan was part of the original climate protection resolution passed by City Council in February 2007; with this event, the city finally began to make good on that promise.

Invited participants were representative of community sectors and had expertise in areas critical to greenhouse gas reductions – energy, water, transportation, and so on. The citizens volunteering a day and a half of time and expertise nearly filled various City Hall conference rooms; Mayor Lee Leffingwell and Austin Energy Vice President of Distributed Energy Services Karl Rábago kicked off the event. “All of us on council believe that global climate change is the issue of our time,” said Leffingwell. “You’re planting acorns,” Rábago urged. Facil­itator Kevin Palmer, of the Center for Sustain­able Solutions, led a series of exercises, and began, “The point here is to work together and build consensus on goals we can accept.” Participants drafted a community greenhouse-gas reduction goal. Over the course of the sessions, they developed supporting goals, measurable objectives, and rough milestone dates – though all areas need more development. (For a commentary and summary of goals, see participant Chris Searles’ blog at www.austinpost.org/users/chris-searles.)

For example, the land-use group identified as a desired outcome an ongoing participatory process that informs the citizenry about land-use issues and provides opportunities for them to shape policy. Sustainable local food production was a priority, as was preventing sprawl; the group hopes for desirable choices for live-work-play that also reduce use of resources. Both this group and the transportation group set a goal of shifting land-use and transportation patterns as one interconnected puzzle – a goal familiar from many years of city and regional planning. Next came specific supporting objectives, such as increasing tree canopy by 50% by 2030 (see “Getting It Done“).

Afterward, Rábago outlined a course of follow-up action. He said groups would reconvene in April and May to flesh out the work from the charrette. They’ll identify who else needs to get involved, immediate and five-year action plans, and how to intersect with the Comprehensive Plan, Strategic Mobility Plan, and other efforts. Rábago hoped to identify “low-hanging fruit” and a “signature project” or two that community members could begin making progress on right away – without waiting on ACPP staff. “It’s definitely a desired outcome for it to become community-led,” he said. “Education and awareness is likely a good first action step, to get all of this to bear fruit.” Program staff will support citizen committees, which will begin working toward a “climate summit” within a year.

Both Rábago and ACPP Director Ester Matthews, who plans to retire in December, said it was likely the community plan eventually would move from Austin Energy to the city of Austin, under the purview of the new chief sustainability officer. According to the job description on the city’s website, that position remains open through April 30. The Community Plan fits within its charge to “develop a comprehensive policy and a strategic performance plan for the city that encompasses current goals, best practices, and moves the city towards the next step of a more environmentally sustainable future.”