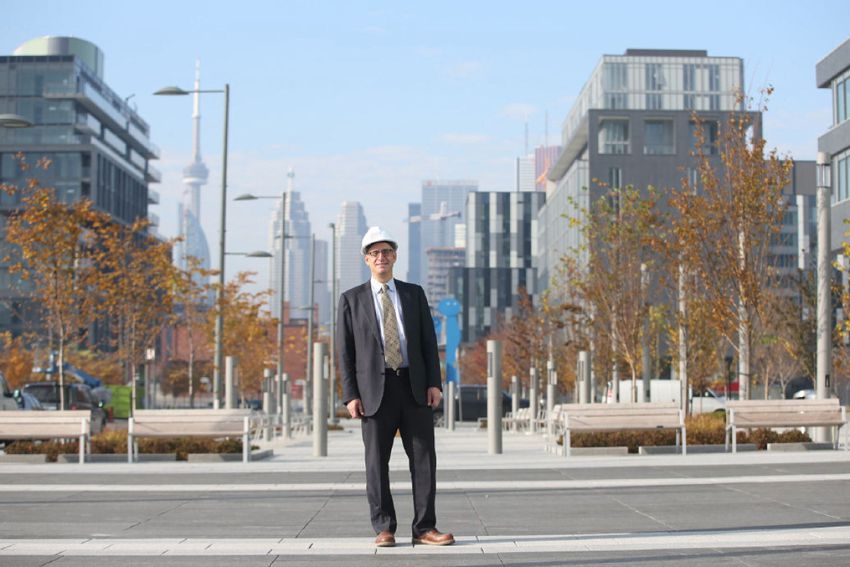 Posted at 23:45h in main, new, Uncategorized by Richard Martz

The Pan Am swimming pools are empty, the white welcome tent is long gone, but workers are hammering away, tearing down temporary walls in condos that once housed athletes and coaches, and will soon become homes to a whole new community of Toronto residents.

Come next April, some 2,000 people will start moving into what, just this summer, was the Pan Am Games athletes’ village. Soon, the neighbourhood will be better known as the Canary District. Retailers will take over, sparking new storefronts next January.

“The move will happen over four months because we’ve only got so many elevators,” says Jason Lester with a smile. He’s the vice president of Dream, which, along with Kilmer Van Nostrand, co-developed the $800 million-plus project, a 35-acre neighbourhood to the east of the Distillery District.

Right now, workers are in the process of turning the bare-bones condos, which each housed up to five athletes and bunk beds, into homes for folks who bought them in the preconstruction phase as far back as 2012.

About 135 units are still for sale, some of them two-storey, 1,300-square-foot townhome units.

The hallway carpets that were walked on by athletes and officials from 41 countries are now being ripped out and replaced. Tile and trim is being installed in public areas that up until now have been largely just covered in drywall. Condo kitchens are due to start arriving soon.

After visiting and consulting with developers of Vancouver’s Olympic Village, the teams that the Canary developers appointed to oversee planning and construction decided it was better to leave kitchens out of the units during the Games, as the athletes already had a central dining area.

Without the kitchens, Pan Am and Parapan organizers could fit up to five bunk beds per unit. That reduced the need to build up to three more buildings in time for the Games, which would have been costly and, more important, boosted the risk the village wouldn’t be ready on time. Organizers had set a tight deadline of last February to take control of the athletes’ housing, almost five months before the opening ceremonies of the Games, which ran from July 7 to August 15.

As a result of the decision to forego fridges and stoves for the Games, folks with units in the Canary District and Canary Park projects will walk into never-used kitchens next spring. And post-Games, all the bathrooms have been locked off, so workers aren’t tempted to use them in the meantime.

“Buyers won’t have the feeling that five athletes slept in my unit,” said Lester during a tour of the bustling site this week.

Waterfront Toronto set the parameters for this new neighbourhood almost a decade ago, deciding where streets and parks would go and what public facilities were needed after lengthy and ongoing discussions with area stakeholders.

Building a completely new neighbourhood virtually overnight on what had been derelict industrial lands — and facing an unforgiving deadline because more than 7,000 athletes needed a place to sleep — was recognized as being risky.

“Everybody felt that the eyes of the world would be on the village. There was a feeling for everybody that this had to be great,” says Meg Davis, vice president of development for Waterfront Toronto.

“It could have looked like a bunker for athletes. Instead, we got this beautiful village. We do not think it could have gone any better than it has.

“The architecture is quite timeless, it all looks authentic and as if it has evolved over time.”

Toronto’s newest neighbourhood, the Canary District, is about to be ground-zero of a retail revolution.

The tenants for all 40,000 square feet of the new stores, cafes and restaurants that form the base of the buildings and will line the Front St. promenade have been carefully chosen for their commitment to health and fitness.

The vice president of site co-developer Dream was determined that the retail reflect the place — a new neighbourhood that’s walking distance to the downtown core, with a state-of-the-art new community centre and YMCA, extraordinary parks, pools and paths.

So Dream and co-developer Kilmer Van Nostrand reached out to LiveWorkLearnPlay, self-described Toronto-based “master developers and placemakers” who’ve helped create thriving mixed-use neighbourhoods in places such as diverse as Whistler, Blue Mountain and Florida’s downtown Boca Raton. “Our company has focused on the ground floor and 20 feet up for the last two decades,” says Rob Spanier, a founding partner of LiveWorkLearnPlay.

“We believe that is the true heart of a community. You sleep upstairs, but you live in your neighbourhood. It’s great retail, great restaurants that make an incredible neighbourhood, whether it’s on the Danforth, on King St. W. or on Bloor St.”

“The overall plan for the area inspired us — we were very intrigued by the history of the area, the culture is compelling — and we liked the idea of being part of creating a new community that was well thought out,” says Wallace, who founded the first Gears 28 years ago.

The tipping point was being offered a rental arrangement that made Gears more a partner than a conventional tenant in a new condo project, where rents tend to be so pricey. Such projects typically only work for big chains, shutting out the mom and pop shops that have lined urban avenues for decades.

Gears and other restaurants and retailers, who will move into their new digs next January and open for business in March, have been offered what are called “percentage rent leases” — a novel concept of charging base rents that are manageable and a percentage of profits that climb as the business grows, says Wallace.

“It’s a strategy that the developer has created to make it more accessible for non-corporate realtors. It’s a deal that we feel is going to be good for everyone and help us be a contributor to this new community.”