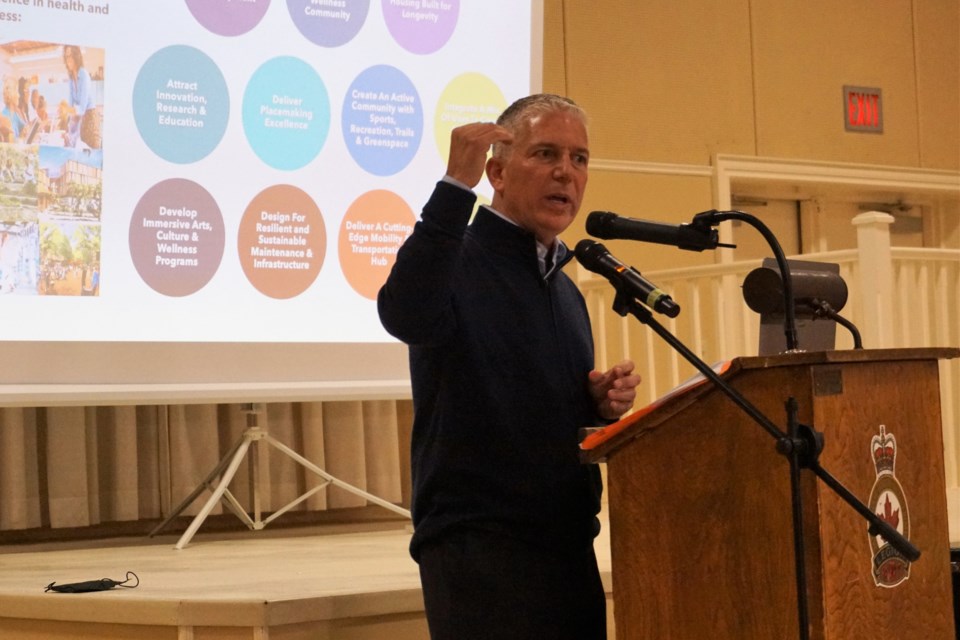 Posted at 13:49h in Uncategorized by Nadia Stolfi

Live Work Learn Play is working with a private landowner to co-master develop, envision and deliver a complete health & wellness community on 130 acres of vacant land in the heart of Simcoe County in Collingwood, Ontario, Canada.

‘I felt more excited and behind the situation, provided we can follow protocols so checks and balances are in place,’ says resident after developer presentation.

Refreshments and opinions were served Tuesday night at the Collingwood Legion.

Attendees were split into tables and encouraged to discuss the project and their concerns, and then present their tables’ thoughts to the group.

The Poplar Regional Health and Wellness Village project proposal for 130 acres was first brought forward to Collingwood council in March.

According to the initial vision for the project presented to council, there will be seven key areas incorporated into the design of the village, including a regional health and wellness campus, a market district, long-term care/assisted living facilities, bio-science and medical research facilities, an eco-wellness centre, a regional transit hub, student and workforce housing and sports medicine clinics.

The developers have said they intend to apply for a minister’s zoning order (MZO) — a controversial provincial tool to fast-track a change of zoning on a piece of land — to change the zoning of the property from industrial to mixed use.

The developer is hoping to see shovels in the ground in 2024-25.

At Monday’s sessions, many residents were vocal about their concerns.

Anita Hearn, a Collingwood realtor, said her mother had Alzheimer’s disease before dying, and she wonders where her mother would have resided had she lived longer. She said the Poplar project would bring aging-in-place facilities to the area where her mother could have spent her final years.

“I’m 100 per cent in support of this project. I think our town needs to grow. We need to attract people to our area, like doctors, and provide for our elderly. If we don’t, I think we’re in danger of becoming urban sprawl. We’d have the homes but we’d just be a commuter town,” said Hearn.

“We have our downtown, and it’s a fantastic downtown … but we need to expand that.”

Retirees George and Nancy Czerny attended to learn more about the project. After a presentation by the developer, Nancy said she felt more optimistic overall.

“I felt more excited and behind the situation, provided we can follow protocols so checks and balances are in place,” she said. “There are many examples of projects that have been built but then don’t sustain themselves, for one reason or another.”

She said she’d like to see more information on the expansion of town infrastructure that will be needed to support the development. Specifically, she would like to see assurances the town’s water treatment plant expansion, which is expected to be completed by 2026, is enough to support the Poplar project.

“What if it’s not feasible because there isn’t enough capacity?” she asked. “On one hand, I think, yes, let’s do this, but on the other, I think there needs to be accountability to make sure what is promised comes through.”

George said it was a nice change of pace to have developers interested in the thoughts of residents from the kickoff of a project.

“If this is the foundation in the beginning, I think this augurs well. It doesn’t look like another developer coming to town to line his or her pockets and then running for cover,” he said.

“This looks like something substantial that’s going to make a difference in people’s lives for the better. It’s eye popping.”

After the presentation, George said he still had questions about the affordability of the proposed housing in the plan.

“For future generations, how do they intend to make what they’re proposing … actually affordable?” he asked.

His perspective on the project changed “dramatically” after the presentation.

“I had no idea about this project. It seems they really mean business and they seem concerned about the community,” said George.

Hearn and the Czernys said the MZO aspect of the proposal doesn’t concern them. However, some attendees raised concerns regarding an MZO application for the project.

Marg Scheben-Edey, a Collingwood housing advocate who attended the session, still has questions on the subject.

“I love the idea of a community hub. It would be unique in the country and I think it could be very beneficial,” she said.

She has two main concerns about the project as it stands: the process of applying for an MZO and the housing component of the proposal.

“I don’t agree with the idea of an MZO. I think it’s very important that the community drives that process. It’s not just about the 130 acres. It’s about roads, water and the surrounding communities. We have to look at it in context,” she said. “We don’t need to rush on that.”

When it comes to housing, she noted while the project is being sold as being affordable, only 10 per cent of the 2,200 proposed units are currently slated to be affordable.

“I have concerns about that. It doesn’t mean it can’t change and we couldn’t work with them to increase those numbers or find other ways,” said Scheben-Edey. “The other thing is, is it ownership, or is it rentals?”

“I’d need to see more definitions and how they’re defining everything,” she added. “This isn’t enough, to me, to bypass the normal zoning process.”

For those who were unable to attend either session but would still like to provide feedback, Live Work Learn Play Inc. has launched a web portal to gather comments, which is available here.