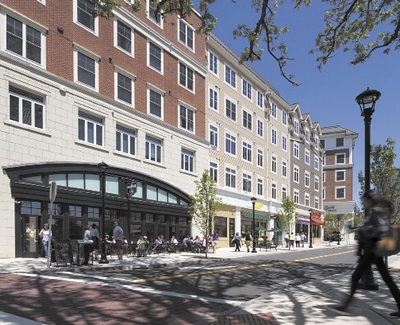 Posted at 08:37h in main, new, Uncategorized by Richard Martz

When Alexion Pharmaceuticals held the grand opening of its $100-million global headquarters in New Haven last month, Ted DeSantos was thinking about more than just the biopharma’s 14 stories of glass-encased office and lab space, or his eight years of involvement with the project.

“I thought about the work that will happen in that building and the people who will be helped by that research,” said DeSantos, senior vice president of community development for Manchester civil engineering firm Fuss & O’Neill. “[Community] development is all about people for me now.”

He’s not alone in that thinking. Over the past 20 years, developers, civil engineers, state officials, businesses and communities across Connecticut and the U.S. have been shifting focus away from traffic-oriented engineering and urban sprawl to smart-growth development concentrated on walkable, condensed mixed-use space that combines residential, commercial and recreational usage.

DeSantos points to New Haven’s Coliseum Redevelopment as a model for smart growth. The $430-million, seven-year project will convert the former Coliseum parking lot into a community with more than 1,000 apartments, 30 restaurants, retail shops, a four-and-a-half-star hotel and conference space. The project is a component of New Haven’s Downtown Crossing development, a massive multi-year plan designed to reconnect the city’s downtown with its medical district.

Alexion’s new headquarters, at 100 College St., serves as one of the centerpieces to the development.

“In the 21st-century, towns will need a mixed-use ecosystem to thrive,” said Max Reim, managing partner of Montreal-based LiveWorkLearnPlay, the developer spearheading the Coliseum project. “Smart growth is about efficiency and lifestyle.”

Reim said the infusion of technology — to create energy efficiency and a carbon-neutral footprint — and access to educational and health and wellness amenities are essential to smart-growth development, which in turn, is driving both residential and business demand.

It’s also driving economic activity — from planning phases through project completion. Reim said his company typically spends one to two years and an estimated $3 million to $5 million in the planning phase alone on architects, engineers, law firms and capturing community feedback before a shovel ever touches ground.

“These large-scale [revitalization] developments generate tens of millions in economic activity,” Reim said. And they create jobs — a reality that state officials are trying to incentivize. Alexion’s new headquarters, for instance, was one of the projects supported through the state’s First Five program, Gov. Malloy’s economic initiative to attract and retain major employers in Connecticut. In addition to relocating 350 employees to New Haven, Alexion expects to create 200 to 300 new jobs in the state by 2017.

Reim said Connecticut’s support for smart growth from state and municipal leaders and policymakers is better than most states. “It makes us want to invest in Connecticut projects,” he said

DeSantos said strong coordination among state agencies is one of the main reasons smart-growth developments — from Storrs Center to West Hartford’s Blue Back Square to Stamford’s Harbor Point — have caught fire in Connecticut. DeSantos said because smart-growth initiatives involve transportation, housing, environmental and economic impacts, having state agencies responsible for those functions on the same page — and collaborating — is essential.

Mark Moriarty, director of public works for New Britain, agrees and sees developments like CTFastrak, the state’s rapid-bus transit system, as an opportunity to build smart-growth developments around transportation infrastructures. “If we can address transit [issues], people may begin to think about [Connecticut] cities as places to be centered,” Moriarty said.

That will require a cultural shift in thinking, Moriarty argues. “Connecticut is not a city-centered state; people see our cities as places to work,” he said. “We need to keep those people — especially younger workers — in our cities and that’s a challenge.”

It’s a challenge that New Britain has been chipping away at with both small- and large-scale projects designed to make the city’s downtown more walkable and pedestrian-friendly. Since 2009, Mortiarty said, New Britain has been using the Complete Street design methodology, an approach that factors in pedestrian safety to balance road design.

New Britain has also been upgrading Main Street with more mixed-use development, adding 16 apartments near the city’s CTFastrak stop. “If we improve our downtown, we attract more residents, increase property values and add to our grand list,” Mortiarty said.

More town leaders are taking notice of smart-growth projects across the state. “We’ve had people from other towns see what we’ve been doing and we try to learn from other communities,” Moriarty said.

Reim said the constant evolution of smart-growth development is a good thing that will benefit communities. “It can work in small towns or large cities,” he said. “But it needs to be contextually appropriate.”

Such development may also potentially be a necessity. The U.S. Census Bureau estimates that the population of the U.S. will grow to 439 million by 2050, which the Journal of American Planning Association estimates will require an additional 89 million homes and 190 billion square feet of new offices, institutions, stores and commercial buildings.

His company is currently investing in 13 projects — ranging from $200 million to $5 billion — across Canada and the United States.

“Smart growth is our best opportunity for successful cities and towns,” said DeSantos. “It’s where companies and people want to be.”