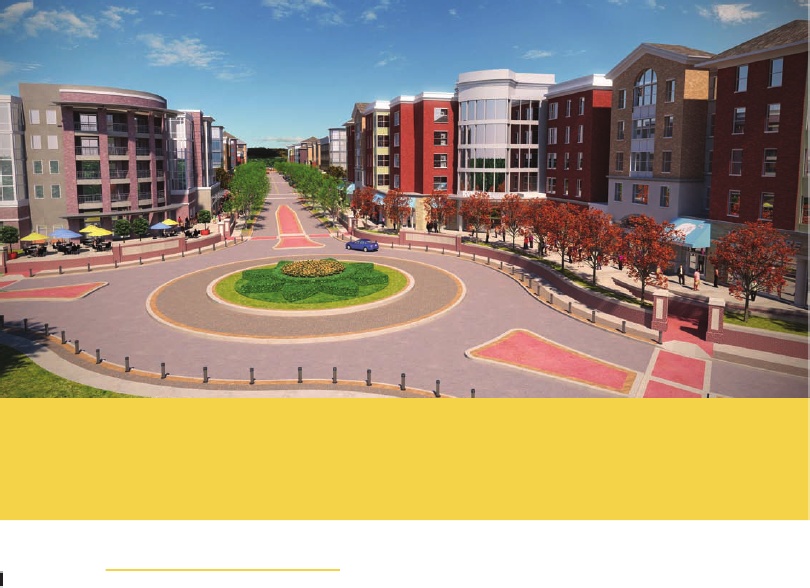 November 4, 2011 The Graduation of Smart Growth

Posted at 11:16h in main, new, Uncategorized by Richard Martz

Smart growth principles are going to college all over the country. A growing number of universities are working with local government officials, developers and planners to create new centers of campus activity providing housing, restaurants, stores, bars, clubs and coffee shops favored by students, and also appealing to other residents ranging from young professionals to empty nesters. Called University Districts, the projects already under construction or being planned as public-private partnerships are not traditional college towns and they’re not exactly town centers. You could, however, call them “college town centers.” “Universities are realizing now if you don’t create this atmosphere, this vibrancy, your university is not going to be as attractive as it ought to be,” said Richard Martz, director of LiveWorkLearnPlay (LWLP) in Montreal. LWLP is an international planning and development firm that advises University District developers.

University Districts are springing up next door to campuses that typically lack the amenities that appeal to students. They are based on a core of mixed-use buildings with retail and restaurants on the first residences and offices upstairs. The districts are designed to be walkable and include protected greenspaces. Some include student housing and space for university offices and classes. University District plans commonly call for single-family homes, townhouses or condos around the core to attract older residents. Universities creating urban districts as new centers to enhance their campuses are engaging savvy developers who have established their smart growth, new urban-ism and sustainable credentials. Among the most advanced University Districts now underway is the Rowan Boulevard project in South-ern New Jersey. Rowan Boulevard is a public-private partnership formed by Rowan University, a New Jersey state university; the Borough of Glassboro; and Sora Holdings of Sewell, N.J. and Towson, Md. Glassboro, located about 25 minutes south of Philadelphia, had fallen on hard times as many downtown businesses moved to outlying malls and shopping centers.

Rowan, largely a commuter college, lacked the amenities of a classic college town, such as Athens, the home of the University of Georgia, and wanted to make its campus more attractive to prospective students. “What this is doing is creating a university community, a quintessential university town,” said Rowan President Donald Farish. “We are integrating the future of the campus and the town together. “Financed by the developer, the $300 million Rowan Boulevard project is part of a larger plan to redevelop downtown Glassboro. One-third of a mile long, the recently constructed Boulevard links the university to downtown. A 36,000-square-foot Barnes & Noble Collegiate Superstore and two buildings providing housing for 860 students are up and running, with a 100-room Marriott Hotel under construction.

Glassboro acquired 90 mostly rundown properties along the route of the boulevard without resorting to eminent domain, said Borough Manager Joe Brigandi. He said Sora Holdings is paying the borough fees in lieu of property taxes on the parcels itis developing, a win-win situation for the borough and the developer. Before Sora Holdings broke ground on Rowan Boulevard, property owners in the area were paying the borough about $70,000 a year in property taxes, said Sora Holdings Partner Greg Filipek. He said his company is paying Glassboro $525,000 a year in fees on the first phase of the project and will pay $2 million a year when Rowan Boulevard is built-out. Given that students do what students like to do in the evening, an entertainment district featuring bars, clubs and restaurants is an important component of a University District; but it’s tricky. “University students like to have a good time at night,” Martz said. “If they can’t do it close to cam-pus, they’ll get in their car and drive someplace.

Any good University District has some night life. You want to keep night life a little bit away from your residences. You want it to be where it’s not going to distract anybody. ” Rowan Boulevard planners solved the noise problem by designating an area on the downtown endif the street, a short walk from the campus, for entertainment. It wasn’t planned that way, but the Storrs Center University District being developed by a partner-ship including the University of Connecticut (UConn) and the town of Mansfield, will be a great place to celebrate future UConn national basketball championships. Storrs is the section of the town of Mansfield where the university is located. Construction of the first phase of the Storrs Center is scheduled to begin this summer, said Howard Kaufman, managing partner of LeylandAllianceLLC, of Tuxedo, N.Y., which is developing the project in partnership with the Mansfield Down-town Partnership. “For whatever reason, no real college town ever developed at UConn,” Kaufman said. “There really is no Main Street, no downtown feel at all.”

The plan for Storrs Center calls for 700 residential units, 160,000 square feet of retail and restaurant space, 30,000 square feet of office space, a parking garage, outdoor civic spaces and preservation of 25of the 45 acres as a conservation area. The cost of the project is estimated at $220 million. The first phase of the project includes two mixed-use buildings with 260 rental apartments and 60,000square feet of retail space. LeylandAlliance is partnering with Education Realty Trust of Memphis, Tenn., which specializes in collegiate housing and will own and operate the residential units in those buildings.

LeylandAlliance will own the retail space on the first floor. Ultimately, the Mansfield Downtown Partnership plans to add condos and expects Storrs Center residents to include “the general public, young professionals, university faculty and staff, empty nesters, graduate students and alumni. “Projects such as Storrs Center and Rowan Boulevard are big and complicated, requiring input from numerous experts, good working relationships with local officials to overcome potential hurdles, and extensive use of smart growth and sustainability principles. “We’ve been at this for seven or eight years, “Kaufman said. “It’s been a long haul,” Brigandi said. “We’ve been working on it for about 10 years now.

In this economic climate, it’s good to see the project move forward. “Plans call for development of a Town & Gown District adjacent to the five-year-old University of California, Merced, probably the largest University District in the country.

The district is part of a major planned expansion of UC Merced, over the next 50years. It is designed to provide housing and services for 30,000 people and create 5,000 jobs within a 10-minute walk of campus. All of the University Districts promote walkability, butte UC Merced project outdoes them. Its mixed-use center includes a walkway modeled after Las Ramblas, the famous promenade in Barcelona, Spain. Among other campuses involved in University District projects, but not as far advanced as Rowan and UConn are Florida State University (FSU), Bowie State University in Maryland, and Cal State San Marcos.

The Florida State project in Tallahassee, known as T’Alley@MADISON, is unique in that it’s sponsored by the Seminole Boosters, the fund-raising arm for FSU athletics. The project focuses on Madison Street, a rundown area south of campus and a block north of Gaines Street, a dowdy warehouse area which is being redeveloped by the city of Tallahassee. The Madison and Gaines Street projects will ultimately blend into multi-faceted urban village providing a large number of new housing, retail and entertainment options for students, townspeople and visitors. As envisioned by Seminoles Boosters President/CEO Andy Miller, T’Alley@MADISON would create a mix of facilities serving both students and alumni returning to campus on fall weekends for football games.

The Madison and Gaines Street projects will ultimately blend into multi-faceted urban village providing a large number of new housing, retail and entertainment options for students, townspeople and visitors. As envisioned by Seminoles Boosters President/CEO Andy Miller, T’Alley@MADISON would create a mix of facilities serving both students and alumni returning to campus on fall weekends for football games. The project is located about four blocks from FSU’s football stadium. Alumni returning for football games are Miller’s ultimate focus. “It’s got to be about the Florida State graduate who comes to Tallahassee for the weekend,” Miller said. “It’s got to be a total experience; that is the driving force in our trying to develop this. “The initial $20 million phase of the project calls for constructing a five-story, mixed-use building and a three-story building dedicated to retail, restaurants.

Alumni returning for football games are Miller’s ultimate focus. “It’s got to be about the Florida State graduate who comes to Tallahassee for the weekend,” Miller said. “It’s got to be a total experience; that is the driving force in our trying to develop this. “The initial $20 million phase of the project calls for constructing a five-story, mixed-use building and a three-story building dedicated to retail, restaurants and entertainment and renovating an 18,000-square-foot former post office. The mixed-use building will contain about 70 student apartments, with 60,000square feet of retail, restaurants and entertainment divided among all three buildings. A dance club will occupy the old post office.

The T’Alley portion of the Seminole Boosters’ project name refers to an entertainment district that will be constructed in a later phase alongside the three-story building. Florida State owns land on the northside of Madison Street, and its long-range plan calls for construction of university facilities there. Patrick K. Hodges, a Tallahassee planning and design consultant who is working with the Boosters, said preliminary work has begun on the site, with construction likely to begin by the end of the year.

He said later phases will focus on amenities for graduates who return for football games Bowie State in Washington’s Maryland suburbs is a historically black university serving about 5,500 students. The MARC commuter train, which runs between Washington and Baltimore, has a station next to the campus, but there’s not much else there. As part of a master plan for the Bowie area, the Maryland-National Capital Park and Planning Commission (MNCPPC) has developed a plan to move the MARC station closer to the centerfold campus and build a University District next to it. “Since it is so isolated right now, they’re having a difficult time trying to attract and retain those students they want for their entire college career,” said planner Kierre McCune, project manager for the MNCPPC. The project is moving forward as the Prince George’s County Council has created an advisory board to recommend designs and financing for the 219-acre project. The MNCPPC plan calls fora mixed-used community center by the station along with town-houses and single-family homes.

The center would include 55,000square feet of retail, 54 rental units, 175 student housing units and a laboratory school, convocation center, fitness center and classroom-office building for the university. “The plan is 20 to 30 years out, but we would anticipate that this would be funded a lot before that,” McCune said. The Cal State San Marcos project will create a large new town center in a rapidly growing area north of San Diego. Sponsored by the city of San Marcos, the project will abut the university, which opened 21 years ago, and provide easy access to the Sprinter Light Rail line serving northern San Diego County.

Michael McDonald, developer of the California State University SanMarcos University District on a 200-acre tract in northern San Diego County, said buildings there will be constructed according to LEED Gold and Silver standards. They will feature renewable energy. “Our budget is probably a couple of billion dollars by the time this thing is built out. This is a very big project,” McDonald said. He said it could take 20 years for his company, Urban Villages San Marco, to complete the project. The district plan features a 500,000-square-foot, mixed-use Life-style Center offering students and residents retail, dining and entertainment venues. It will include up to 800 student housing units and 2,600 multifamily homes.